I am hoping to take a couple of days off before Christmas and may use this for my sub.  Hopefully, I will come back and write detailed plans for this to share with you.

I think that this lesson at FunArt4Kids could be broken down enough for any sub to be successful.

If you are lucky enough to get a sub who can use your computer, projector, and PowerPoint, they can use this great presentation here:  Paul Klee.  If you can also always print it out for your sub.  (This blogger has a nice collection of another artist PowerPoints too.) 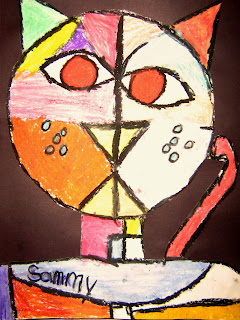 Email ThisBlogThis!Share to TwitterShare to FacebookShare to Pinterest
Labels: kindergarten

You would think that since I gather sub plans for this blog, preparing for a sub would be a breeze for me.  Not so.  Though I have so many ideas right at my fingertips, I still spend unspoken numbers of hours writing the plans and making the visuals.  So I will post the written plans I made this week and maybe it will save you a little time.

I originally posted a link to the blog, Clown and Poodle, but I am having trouble linking to that site now. So, I got my original idea from them, and this the lesson I chose to leave for my sub yesterday.

Here is how I prepped.  Since all my classes were going to do the same lesson, I taped the visuals in the front of the room.  Some of these are ideas I copied directly from her original post. 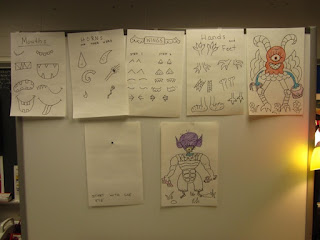 In this lesson, the students glue a googly eye on the paper.  I did this the day before my sub came as to save her the hassle of dealing with the thick craft glue.  When the students received their work paper, it had a googly eye glued on it already.


Here are a couple of the finished pieces done by second graders: 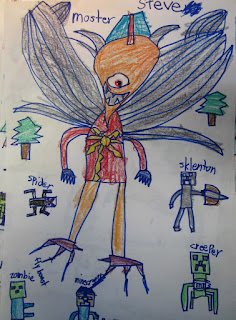 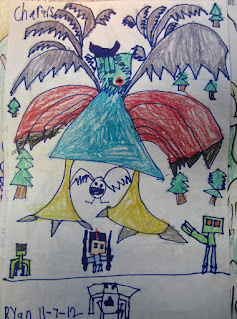 Here are the lesson plans as written for my sub:

Tell the students that today they will be inventing a new silly monster all on their own.  It will look like no one else’s!

Read these lyrics with a lot of fun in your voice:
This is called the One Eyed, One Horned, Flying Purple People Eater.
Well, I saw the thing
A comin' out of the sky
It had a one long horn
And a one big eye
I commenced to shakin'
And I said "oohwee
It looks like a Purple
People Eater to me"


Well, he came down to earth
And he lit in a tree
I said, "Mister Purple People Eater,
Don't eat me"
I heard him say
In a voice so gruff,
I wouldn't eat you
Cause you're so tough

I said, "Mister Purple People Eater,
What's your line?"
He said,
Eatin' purple people,
And it sure is fine.
What is the reason
That you came to land
I wanna get a job
In a rock 'n roll band

Well, he went on his way
And then what-a you know
I saw him last night
On a TV show
He was blowin' it out,
Really knockin' 'em dead
Playin' rock 'n roll music
Through the horn on his head

Show the students a paper that has one eye glued to it.  Tell them that they will invent their own one-eyed monster using this paper.
Show them the sample monsters that I have drawn.
Ask them how many eyes their monster should have. <There is one eye glued on the paper, but they can draw more if they want.>
Ask them what else their silly monster should have.  (Wings?  Legs?  Toes?  Teeth?  What else?)
Show them the charts on the SmartBoard and tell them that they may use some of the ideas there, but they don’t have to.  They can invent whatever they want.
Show them the paper that has one eye glued on it.  (They’re in the cardboard box under the SmartBoard.) Tell them that they will use that as their monster’s eye.  They use the Sharpie to draw around it.  They add the rest of the head, the body and what ever else they want.

Show the drawings of the two monsters.  Point out that they have things in their hands.  What will they put in their monster’s hands?

Will their monster be scaly?  Will it be hairy?  Bumpy?  Rough?
Have the students go to the tables you assign them.  (Send four to red…four to yellow…four to blue….four to green…..etc.)
After they are seated, tell them to look at their seat number.  Tell them that person #1 should stand up.  If there is no #1, choose #2 for that team…or #3 of need be.  That person will be the team helper.

Hold all the papers.  Have the helpers line up in front of you and tell you how many sheets they need for their team.

If lots of children finish before the end of class time, call them all up front with their drawings.  You can collect the drawings and show each one.  The children can clap for each other.  Remind them that it should be clapping only and that we clap for every child.

If there is still time at the end of class you can read the book “Glad Monster Sad Monster.”  I will put that up front with the other supplies.
Helpers should return Sharpies and crayons to the front of the room.
The children should take their art work with them.
Please give me feedback about how the lesson went.
*********
If you like that lesson, you might also like this one from my shop on TeachersPayTeachers. 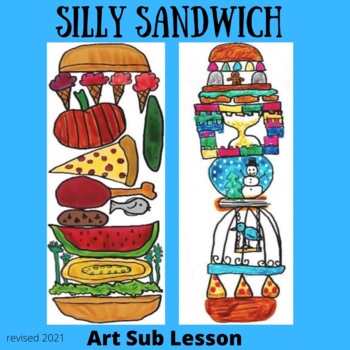 Posted by Snippety Gibbet at 8:24 AM No comments:

This lesson was intended for fifth and sixth-grade students.  The sub even left a comment about how great a lesson it is!  Find it at Art Class with LMJ. 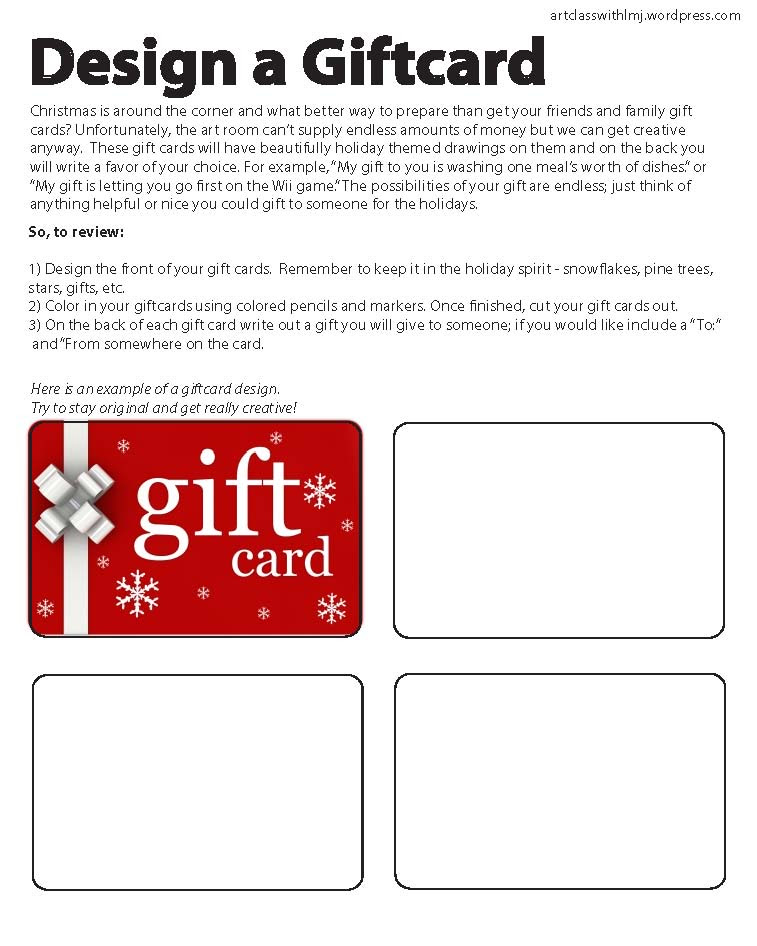